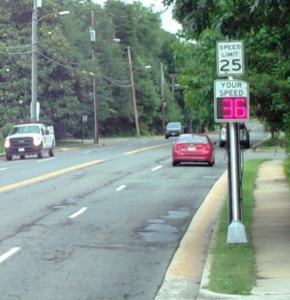 On Saturday, Alexandria City Council approved a road diet for a portion of Seminary Road that would reduce four lanes to three (one lane each way and a turn lane in the middle) and add buffered bike lanes, pedestrian refuges, and enhanced crosswalks. It rejected by a 4-3 vote the city manager’s proposal to leave Seminary Road’s four lanes alone and instead only install on-demand pedestrian crossing lights at two intersections.

For months FABB has been proud to work with a range of local and regional bicycle, pedestrian, and highway safety advocates in support of a the road diet proposal for a short section of Seminary Road scheduled for repaving this fall. Unfortunately, the proposal became polarized as some residents in the area argued for maintaining the status quo. Both sides had petitions with more than 1,000 signatures in support of their respective positions. Nearly 100 people registered to speak up at an Alexandria City Council meeting on the issue.

The proposed road diet supports several Alexandria city policies, including: the 2008 Transportation Master Plan and 2016 Pedestrian and Bicyclist updates, the 2014 Complete Streets policy and the 2017 Vision Zero plan. Road diets have been successful in Alexandria and Fairfax County in reducing speeding and crashes, adding needed turn lanes, and accommodating the needs of all road users.  While there were fears of increased traffic congestion, staff analysis showed that only an additional 7.6 second delay at the intersection of Seminary and St. Stephens roads during the worst 15 minutes of morning peak traffic.  In fact, a similar project on King Street in 2016 reduced speeding by 18% without adding congestion or cut through traffic.

FABB appreciates the concerns of those residents who opposed the road diet and supports safer engineering and enforcement of traffic laws to alleviate risks of unsafe driving. We encourage transportation officials and local law enforcement to work together in developing plans to forestall bad decisions by motorists and ensure neighborhood safety.

An interesting feature of the Seminary Road controversy highlights the importance of having FABB members in all parts of the county stay active in advocating for improved multi-modal transportation options and new bike infrastructure. Although the heart of the issue was the use of Seminary Road by commuters from areas outside of Alexandria, local opponents of the road diet seemed to take a view that the road belonged to them alone.  Some even sought to delegitimize the support for the road diet offered by what they termed “outside influencers,” who they thought should have no say in a transportation issues that affect all users of the road.

FABB was proud to have joined with the following groups in supporting improved access and safety on Seminary Road for its non-motorist users: Alexandria Bicycle & Pedestrian Advocacy Committee; Virginia Theological Seminary; Alexandria Families for Safe Streets; Alexandria Environmental Policy Commission; Alexandria Transportation Commission; Washington Area Bicyclist Association; Coalition for Smarter Growth, a D.C.-based advocacy group; and Phoenix Bikes, an Arlington nonprofit bicycling program and bike shop. This was not, as opponents charged, “the appearance of broad support” but was genuinely widespread endorsement for local governments and the Virginia Department of Transportation to use the repaving program to calm traffic, improve flow, increase safety, and add bicycle and pedestrian facilities.

We can’t overemphasize how important it is for bicyclists and others interested in better transportation options to get involved in advocacy and to speak up at local community meetings on transportation issues. There is increasing resistance in our car-dominated culture for any transportation changes that appear to threaten motorists’ freedom to race along our roads and speed between stoplights to shave a few minutes off their commuting times. We need more bicyclists to be become active in advocating for the transportation changes northern Virginia needs to avoid even worse gridlock.

FABB will continue to lead the charge and offer support and training to local riders who want to be effective advocates for better bicycling.

Won’t you join us? For more information, please contact FABB at [email protected].