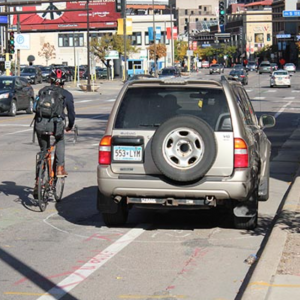 SB 437 – Vulnerable Road User. Provides that a person who operates a motor vehicle in a careless or distracted manner and is the proximate cause of serious physical injury to a vulnerable road user, defined in the bill as a pedestrian; the operator of or passenger on a bicycle, electric personal assistive mobility device, electric power-assisted bicycle, wheel chair or wheel chair conveyance, skateboard, roller skates, motorized skateboard or scooter, or animal-drawn vehicle or any attached device; or any person riding an animal, is guilty of a Class 1 misdemeanor. The bill also prohibits the driver of a motor vehicle from crossing into a bicycle lane to pass or attempt to pass another vehicle, except in certain circumstances. The minor amendment proposed by the governor was suggested by the bill’s sponsor, 36th District Senator Scott Surovell, to ensure that children in bike trailers were included.

HB1442 – Photo Enforcement. Enables Automated Photo Speed Enforcement in school and work zones. The bill provides that the operator of a vehicle shall be liable for a monetary civil penalty, not to exceed $100, if such vehicle is found to be traveling at speeds of at least 10 miles per hour above the posted highway work zone or school crossing zone speed limit by the photo speed monitoring device. The minor amendment proposed by the governor was suggested by the Virginia State Police.