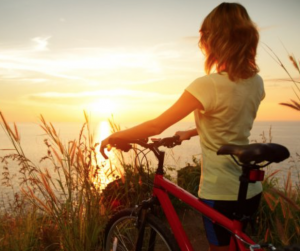 FABB believes there are many, many, many reasons to support bicycling. The benefits to our region’s citizens’ health and economic well-being are just the starting point.

Right now, nothing seems more important than bicycling’s benefits for the environment and climate. Recent news reports show that climate change caused by carbon dioxide emissions from fossil fuels has plunged the Western United States into its worst drought in two decades amid a record-breaking heat wave. Wildfires have raged in Montana and Utah. The strain on power grids in Texas caused officials to ask residents to limit appliance use and set their thermostats higher to avoid blackouts. Detroit has suffered unusually harsh rain and flooding. 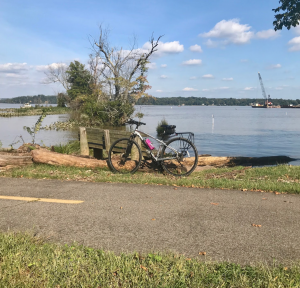 In Virginia, hotter temperatures contribute to poor air quality that exacerbates health conditions such as asthma. Meanwhile the state is increasingly prone to more intense rainfall, storms, and flooding followed by droughts that degrade agriculture and our overall economy. Coastal communities and properties along the Potomac will be increasingly at risk to flooding, tidal storm surges, and sea-level rise.

FABB believes that a simple, sustainable, and easily and economically adopted solution to reducing carbon emissions is more bicycling as part of an active transportation program. Getting ourselves and others out of cars for short trips and daily commutes will greatly reduce pollution and congestion. And, studies show that active travel is cheaper, healthier, better for the environment, and no slower on congested urban streets than car travel. When necessary, a combination of a short car ride, public transportation, and biking could serve most travel needs within suburban Fairfax County while greatly reducing congestion.

There are, of course, other fixes, such as electric cars, to reduce emissions. But, many of these are costly and difficult to sustain. It is estimated that even if all new cars were electric now, it would still take 15 to 20 years to replace the world’s fossil fuel car fleet.

Meanwhile, a recent study showed that cycling is much more effective than electric cars in helping reduce carbon emissions. First, e-cars are not carbon neutral in their manufacture, and driving an electric vehicle is only as green as the energy supply. A comparison of the life cycles of bike, e-car, and motor vehicle travel, taking into account the carbon generated by making the vehicle, fueling it and disposing of it, found that emissions from cycling could be more than 30 times lower for each trip than driving a fossil fuel car and about ten times lower than driving an electric one. Yet, government at the local and national level are more willing to subsidize e-cars than e-bikes or regular bikes.

What can we do now? First, bike more when able, especially for short trips. Try bike commuting, even if you do it just one day a week. The study mentioned above found that the average person who shifted from car to bike for just one day a week cut their carbon footprint by 7 pounds of carbon dioxide, the equivalent of emissions from driving a car 6 miles. FABB can help with route planning for a bike rider or combining riding with public transportation as well as advice on best practices for a safe ride. Plus, you can join FABB in advocating for local corporations to follow Amazon’s lead in supporting bike commuting.

Second, let your elected representatives at all levels know that you are concerned about climate change and want quick action on reducing carbon emissions, starting with more resources for biking and walking infrastructure. Cities and countries around the world have shown that there are relatively easy and cost-effective ways to expand bicycling and reduce car usage, in some cases by transforming existing roadways and streets to bike lanes and walkways (check out what Paris has done over the past year). US cities and counties are just taking baby steps in these directions and could do so much more if the political will can be summoned.

Finally, join FABB in advocating for more and better biking infrastructure to make it easier and safer for everyone to ride. We need to work with government, businesses, and our neighbors to persuade them to switch the emphasis from carbon-heavy transportation solutions (more roads) to lower carbon alternatives. We applaud Fairfax County’s active transportation plans, but the spending on biking and walking infrastructure is a drop in the bucket compared to street and road projects.

The time to act is now. Our very lives and those of subsequent generations depend on it.

Please join us and help make bicycling—and the world—better by volunteering at [email protected].