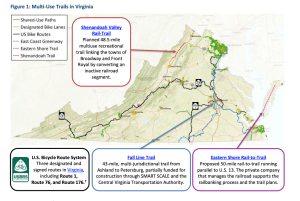 When session ended in March, competing House and Senate proposals suggested a final trails number somewhere between $57-90 million. The eventual compromise budgeted $93 million–$14 million of which is coming from new federal Transportation Alternatives Program funds—for multi-use trails. The General Assembly approved that budget on June 1, and the Governor issued no line item vetoes nor amendments to that line item, avoiding any additional decisions by the legislature on that funding. 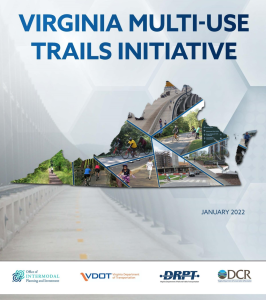 Some of the planned trails likely to benefit from this spending include the Fall Line Trail, a 43-mile trail between Ashland and Petersburg, the nearly 50-mile-long Shenandoah Valley Rail-Trail to link Front Royal and the town of Broadway, and the Eastern Shore Trail, a proposed 50-mile rail-to-trail running parallel to U.S. Route 13. Learn more about about Virginia’s plans from the recommendations published earlier this year by a working group with representatives from the Virginia Department of Transportation (VDOT), the Department of Rail and Public Transportation (DRPT), the Department of Conservation and Recreation (DCR), the State Trails Advisory Committee (STAC), and staff from the House Appropriations Committee and Senate Finance and Appropriations Committee.

FABB joins the VBF in encouraging riders to send a note of appreciation to their senator and delegate for their support, especially those northern Virginia representatives who led the budget negotiations process that made this possible:

Locate and email your Senator and Delegate with a personal note here: https://whosmy.virginiageneralassembly.gov/

Let your representatives know that you support better bicycling in Fairfax County and throughout the commonwealth.