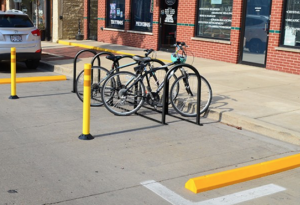 The council members will be considering a proposal made last year by the town’s Transportation Safety Commission to move an existing but underused bike corral from one part of Church Street to another. The council put any decision on hold until additional off-street parking for cars became available on or near Church Street.

Admittedly, there will almost always be a car to fill a parking space, but this seems like a poor trade-off for merchants when a bike corral could allow up to twelve bicycling customers to park near their stores.

FABB is reminding local cyclists who want more options to shop by bike to turn out and defend the corral. The Town Hall Council Chambers are at 127 Center Street South in Vienna.