The Time is Now: For Safer Streets and Roads 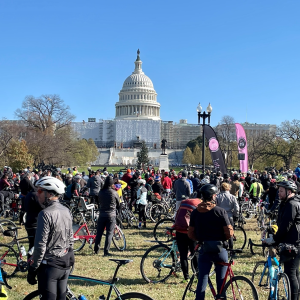 Ride for Your Life cyclists gathering before Congress.

America’s streets and roads, including those in Fairfax County, are becoming increasingly deadly for all users, especially people—vulnerable road users—outside of motor vehicles. Because every driver is a pedestrian at one time or another and most cyclists are drivers, it is in everyone’s interest to improve bicycling and walking infrastructure with an emphasis on safety.

Perhaps you saw the recent New York Times article on the rise of road deaths in the United States. It began by featuring our area’s recent Ride for Your Life in honor of Sarah Debbink Langekamp, the State Department official crushed by a truck while biking home from her sons’ elementary school. It then discussed how poorly the United States compared to other developed countries in road fatalities The Times reported that, according to the chair of the National Transportation Safety Board, “Motor vehicles are first, highways are first, and everything else is an afterthought.”  It is a culture baked into state and local transportation departments.

The time is now for cyclists and pedestrians to speak out loudly and persistently to change this culture. Otherwise, the situation on our streets and roads will only get worse.

Until relatively recently traveling by motor vehicle in the United States was no more dangerous than in other developed nations. In the last 30 years, however, traffic death rates in Europe, East Asia, and Canada fell dramatically while America failed to keep pace. 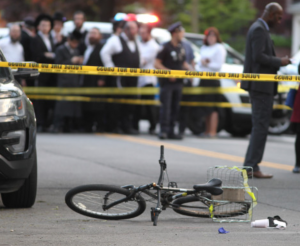 In short, all Americans—drivers, walkers, bikers—are at a much higher risk of dying in a crash than people in other rich nations. Moreover, the US response is miles behind almost all other countries’ efforts to improve safety and save lives.

Many Americans, especially elected and transportation officials, resist acknowledging global comparisons as meaningful and cite perceived unique US characteristics to deflect calls for reform. A common explanation is that the large number of US road deaths is inevitable in a continental-sized country that relies heavily on motor vehicles.

The US traffic safety crisis, however, is not a reflection of geography or culture. Instead, it is transportation policy and engineering/infrastructure decisions that prioritize rapid motor vehicle travel over roadway safety and, especially, the protection of vulnerable road users.

Our neighbors to the north in Canada, however, are much less likely to die in a crash (60% less likely, in fact) despite being similarly car-centric and expansive with comparable street and road networks. When US road deaths per capita rose 19% from 2010 to 2020, Canada’s rate fell at almost the same pace. The explanation is that Canada pursues safety improvements similar to those used by other countries with lower rates.

The time is now for us to embrace some, if not all, of the wealth of solutions other countries have employed to save lives. These involve policy and engineering choices that:

FABB has been active in all of these areas for years. We represent riders on various working public and private groups and committees concerned with safe streets, active transportation, and trails, sidewalks, and bike ways as well as with the Fairfax County Police Department. We are fulfilling a Virginia Highway Safety grant with classes to produce better and safer riders. We press local transportation officials to improve the maintenance of bike lanes, trails, and sidewalks to avoid forcing users into dangerous situations. We support legislative efforts to increase prosecutions of and penalties for reckless drivers.

With so many lives lost, now is the time to do more to create safe streets for everyone. Won’t you join us during our annual appeal with a gift to support our work?

Thanks to a generous donor match offer, you can double your gift’s impact if made between 5 and 15 December. Please donate here now.