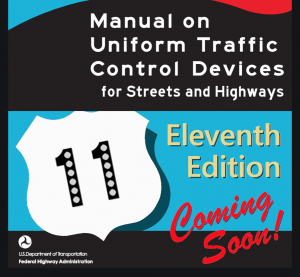 FABB has joined advocacy organizations across the nation to urge the Federal Highway Administration to improve the Manual of Uniform Traffic Control Devices (MUTCD), the federal guidelines for streets and roads. Biking, walking, and other highway safety advocates are demanding a fundamental reframing of MUTCD to prioritize safety and equity over driver speed.

As guidelines, many MUTCD recommendations are not legally binding, but they shape the design process for countless signs, signals, and roadway markings throughout the United States as demonstrated by transportation engineers regularly using them to justify road design choices that threaten pedestrians, cyclists, wheelchair users, and other vulnerable road users.

MUTCD has perpetuated numerous dangerous guidelines, such as the so-called 85th percentile rule for setting speed limits based on drivers’ average rate of travel. The MUTCD is also behind crosswalk signal timing standards that deny slower walkers sufficient time to cross multi-lane roads.

The FHWA announced last December that the MUTCD had been revised for the first time in 12 years. But, beyond correcting the most obvious problems, most of the revisions did little to improve safety or address the favorable treatment given to facilitating high speeds by motorists.

The agency is accepting public comments, so now is the time to demand meaningful revisions to improve safety and equity. These grossly inadequate guidelines contribute to the growing pedestrian and cyclist safety crisis, accelerate climate change, and reinforce longstanding racial inequities on our streets. Public comments must be submitted to the public docket on or before May 14, 2021.

Fairfax Alliance for Better Bicycling (FABB) respectfully requests that FHWA reframe and rewrite the MUTCD, creating a path for the creation of comprehensive safety-based guidance. Doing so will allow FHWA and the Biden Administration to make strides towards equity, sustainability, while reducing traffic deaths and serious injuries.

Many bicycle and pedestrian crashes have occurred in Fairfax County in recent years, primarily along high speed arterial and collector roads. Speeding is a major problem and police speed enforcement is almost non-existent. In fact, police will not issue speeding citations unless motorists are traveling greater than 10mph over the limit.  Whenever we ask for speed reductions on major roads we are told that because of the 85th percentile, speed limits will not be reduced. We’ve asked for a HAWK signal where a bicyclist was struck at a crosswalk near an intersection and we were told that placement was not allowed because of the MUTCD, despite the fact that many HAWK signals in similar situations in Tucson, AZ have proven to be very effective.

To date, the MUTCD has done little to help stem the approximately 40,000 traffic deaths the U.S. sees each year. This is due largely to the Manual’s over-emphasis on motor vehicle operations and efficiency on rural highways, and neglect of other modes and contexts. To guide the development of an improved, safety-oriented document that supports the equity, safety, and sustainability vision of the Biden Administration, FABB would like to call attention to the following fundamental problems that must be addressed in an updated MUTCD:

The issues described above are endemic to the document’s underlying approach and undercut efforts to provide safe, multimodal accessibility in urban settings. The MUTCD needs holistic reframing to support cost-effective, sustainable, and equitable city street design and improve safety and accessibility for the most vulnerable users. We respectfully request that FHWA reframe and rewrite the MUTCD, creating a path for guidance that more closely aligns with the equity, safety, and sustainability goals of American cities, as well as those of the Biden Administration.