Here is a story, now a decade old, that highlights the importance of sustained advocacy in making bicycling better in Fairfax County. 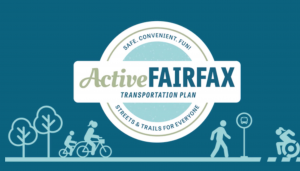 During the first full week of March in 2012, FABB was again asking local bicyclists to take to the ramparts to defend bike program funds in the county budget.

In 2009 FABB and other citizens supportive of multi-modal transportation options had succeeded in preventing the total elimination of bike program funding from the 2010 budget. But, while the bike coordinator position was saved, operating funds ultimately were cut by 45 percent from around $379,000 to $170,456. In the 2011 budget, all operating funds were eliminated, leaving the bike coordinator with no money and limited staff. Fortunately, money for the Bicycle Master Plan had already been programmed and work continued on its development.

After FABB’s call in early March 2012, each member of the Board of Supervisors received more than 300 letters asking them to fund the Bicycle Program and new infrastructure. FABB representatives testified before the Board at the budget hearings to make the case for Bicycle Program funding. Despite these efforts, the Board again decided against funding, leaving the program with no operating funds and only a small amount of money for infrastructure projects from the commercial & industrial tax fund.

The lean period continued for a couple of years after the Bicycle Master Plan was completed in 2014. Money for expanded bike infrastructure was part of the 6-year transportation funding package passed that year. It would be 2016, however, before operating funds, following another major FABB advocacy effort, were again given to the bike program.

Fairfax County recently combined the Bike Program with its Pedestrian Program to form the Active Transportation Program, which is led by Chris Wells. Last fall, the county updated and combined the Bicycle Master Plan and the Countywide Trails Plan into the ActiveFairfax Transportation Plan to create a roadmap for the implementation of safe, convenient, and enjoyable streets and trails in Fairfax County. FABB applauds these changes and strongly supports ActiveFairfax initiatives.

While the county budget environment for bicycling has improved over the past decade, history shows that, without strong public advocacy, that environment can change quickly in response to economic problems as government officials favor other priorities. Between rising gas prices, climate change, and the need for a more resilient local economy, concerted action to make bicycling a viable, safe, and reliable form of transportation is more important than ever.

If you are a rider, have loved ones who ride, or want to become a rider to reduce your transportation costs, reduce pollution, and lower America’s consumption of petroleum, please join FABB.  You can contact us at [email protected].