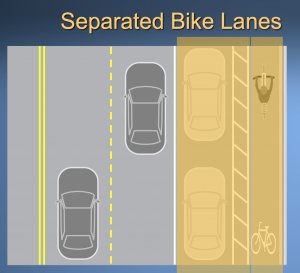 Earlier this month the National Transportation Safety Board (NTSB) announced that it had completed its first study of bicyclist safety on US roadways in 47 years! Since its last report on the topic in 1972, the agency determined that critical changes are needed to address the recent rise in fatal bicycle crashes involving motor vehicles (Duh!). The final safety report will be available later this year.

Some of the preliminary findings released by the NTSB are worth mentioning, and you might want to visit the site to get the details. The NTSB investigators found that improving roadway design, enhancing the “conspicuity” of bicyclists through enhanced visibility and technology, and increasing helmet use held the most promise for reducing the number of fatal and serious crashes. 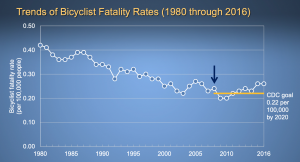 Some key findings and recommendations are:

FABB has consistently supported improving cycling infrastructure including separated lanes, clearly marked intersections, and adequate lighting. We also encourage our fellow bicyclists to do everything they can to protect themselves. Please follow traffic rules, obey traffic signals, wear bright and reflective clothing, and use bicycle lights to reduce risks on the road. And, while FABB has not taken a position on mandatory helmet laws and understands that there are pros and cons to such legislation, we still encourage riders to wear a helmet.

FABB totally agrees with the NTSB statement that “All road users have a right to arrive at their destinations safely, and with so many more people using bicycles as a means of transportation, clearly more needs to be done to protect these most vulnerable users of our roadways.”

Be careful out there.