A large number of riders joined us last Sunday for the FABB/Coalition for Smarter Growth bike ride through the area known as Fairfax Center. Ride leaders highlighted plans for the area, which is poised for a lot of changes that will have a big impact on bicycling and walking. 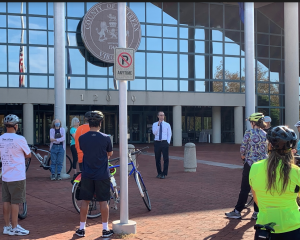 Fairfax Center is aptly named, lying in the center of the county and just west of Fairfax City where I-66, Route 50 and Fairfax County Parkway converge. The area includes Fair Oaks Mall, Fair Lakes, Fairfax Corner, the Government Center, and thousands of housing units.

That’s a lot of housing, jobs, shopping and services within a fairly contained area. However, walking and bicycling to these destinations is difficult and dangerous because of wide roads and so much land given to car parking.

Braddock District Supervisor James Walkinshaw kicked off the ride with opening remarks that spoke to the need to redesign the area’s roads so that they are safe and convenient for everyone. “We have the chance to make Fairfax Center the next great place for people to live, and bike and walk,” he said.

During the seven-mile ride, participants viewed numerous examples of how the county is starting to work toward this vision.

At the same time, the county is working on improved transit and housing plans that will shape the area’s future. Riders learned about plans to build affordable housing at the Government Center, the new transit center near Fairfax Corner that the county is building to connect residents and commuters to express bus service on I-66, and plans for redeveloping Fair Oaks Mall with a mix of housing, businesses and hotels. 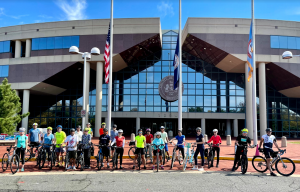 The great turn out for the October 2, 2021, Fairfax Center Ride.

All of these plans will have a major impact on making Fairfax Center a great community to live and work and represent another major advance in making bicycling better in Fairfax County.

Want to be a part of the biking aspect of these multi-modal solutions to longstanding environment, congestion, health, and general quality of life problems? Contact us at [email protected].