Although not in Fairfax County, one of the most important transportation projects in our region is the planned rebuilding of Long Bridge, the lone bridge that carriers rail traffic across the Potomac River between Virginia and the District. Proposals to renovate the 115-year-old bridge include making a pedestrian and bicycle crossing part of the project.

Earlier this month, as part of our commitment to expanding a connected regional network of bicycle-friendly trails and lanes, FABB wrote to the Federal Railroad Administration (FRA) and the District Department of Transportation (DDOT) in support of the inclusion of a safe pedestrian and bicycle crossing as part of the Long Bridge project. Specifically, FABB supports the stand-alone bicycle and pedestrian bridge preferred alternative and asked FRA and DDOT to build it at the earliest possible time. 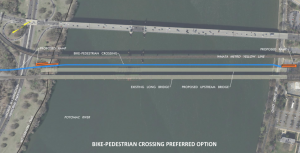 The project planners are considering the addition of a bicycle and pedestrian crossing, in part, as a mitigating factor for the adverse environmental impacts the renovated rail bridge will have on nearby parkland and because they received roughly 1,600 comments earlier in the process advocating such measures.  The National Park Service (NPS), which has jurisdiction over several parks impacted by the project, has agreed that a bike-pedestrian crossing could potentially serve as required mitigation for the impacts.

The proposed bike/ped crossing would be on an independent bridge between the new railroad bridge and the Metrorail bridge. It would begin in Long Bridge Park, cross over the George Washington Memorial Parkway and Mount Vernon Trail on the Virginia side. After crossing the Potomac, it would cross over Ohio Drive SW and end in the NPS Parking Lot C in East Potomac Park. Ramps would connect the crossing with a path just north of the new Long Bridge Park Aquatic Center, the Mount Vernon Trail, and East Potomac Park.

We don’t have details on the October 22 public hearing on the project, but there is still time to send comments on the draft Environmental Impact Study and Draft Section 4(f) Evaluation (read the Executive Summary here). These are due by October 28, 2019, and may be submitted in the following ways through the online comment form at www.longbridgeproject.com or via email to [email protected]