FABB Has Informative Meeting with FCPD 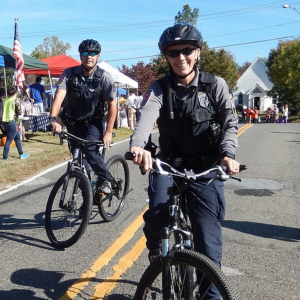 In mid-January FABB met with two Fairfax County Police Department (FCPD) officers to discuss bike laws. The official meeting was part of FABB’s larger effort to work with our local police to improve the equitable enforcement of bike and other traffic laws. Their specific goal was to gain a better understanding of how the FCPD interprets bike laws that have a history of being controversial.

We were pleased to learn that FCPD is developing a bike law training segment that will be used during the officers’ daily roll call, which was described as one of the best ways to transfer bike law knowledge to rank and file officers. Our members brought recent bike law changes, such as the law allowing motorists to pass a rider across a double yellow line, to the officers’ attention for inclusion in the training effort. The officers agreed to allow FABB to review the training material and were willing to work with us on other ideas for conducting training for FCPD as well as motorists and bicyclists.

During the meeting our two members raised and discussed FCPD interpretations of several examples of traffic situations involving the bike laws. The officers cautioned that their interpretations might not be held across the department and advised that the courts were the final arbiter of law enforcement actions. With this in mind, FABB still wants to increase our understanding of general interpretation of laws and regulations affecting bikes in traffic so that we can provide the most accurate information to others.

Among the examples we discussed were situations impacted by the Virginia code (46.2-905) that requires cyclists to ride as close as safely practicable to the right curb or edge of the roadway with certain exceptions (such as in a lane of insufficient width for a motorist to safely pass a bicyclist in the same lane, which includes most lanes in the county). FABB agreed to provide graphics for inclusion in FCPD educational material. 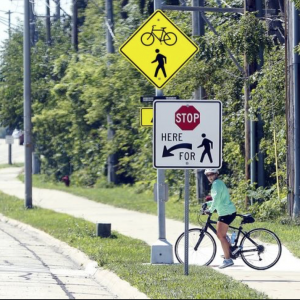 We were told that the law (46.2-924) requires a rider or a pedestrian to be in a crosswalk (“crossing such highway”) before a motorist is required to yield. This interpretation holds for marked and unmarked crosswalks. With regard to riding a bike from a trail into a crosswalk, the law (46.2-904) treats the cyclist the same as a pedestrian.

Virginia law (46.2-907) allows a rider to overtake and pass another vehicle on either the left or right side, staying in the same lane as the overtaken vehicle, or changing to a different lane, or riding off the roadway as necessary to pass with safety. There has been confusion about this in the past, possibly over the immediate interpretation of whether the action was safe. The officers suggested that this code could be added to the new education material.

FCPD judged that the law on aggressive driving and the harassment of others (46.2-868.1) did not specifically apply to riders unless one of several specific code sections were violated and the motorist had an intent to harass, intimidate, injure, or obstruct another person. The officers suggested that the general reckless driving code (46.2-852) might be more appropriate and easier to apply.

We clarified with the officers that the law (46.2-1078) that makes it illegal for any person to operate a motor vehicle, bicycle, or other vehicles while using earphones on or in both ears on a highway does not apply to trails. 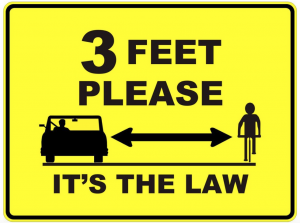 The law (46.2-905) specifies that persons riding bicycles on a highway shall not ride more than two abreast, shall not impede traffic, and shall move into a single file formation as quickly as is practicable when being overtaken from the rear by a faster moving vehicle. It also states that, on a laned roadway, cyclists shall ride in a single lane. The FCPD officers interpreted the law to apply to four-lane roads, which could affect practices by group rides. However, that does not mean cyclists must ride to the far right. They should position themselves in the lane where they feel safe. 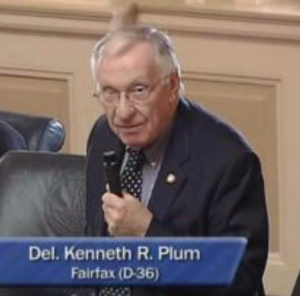 We discussed the issue of when a motorist is required to yield to a pedestrian in a crosswalk in situations on multi-lane roads. A broad interpretation of 46.2-924 suggests that any time a pedestrian is in a crosswalk all drivers must yield to them, but a strict interpretation indicates that the motorist would only need to yield when the pedestrian is in their lane. The officers agreed that a new code making passing at a crosswalk illegal is needed to clarify the requirement to yield. The General Assembly is currently considering a bill (HB1644) offered by Reston-area Delegate Ken Plum that prohibits the driver of a vehicle from overtaking and passing a vehicle stopped at a marked crosswalk to permit a pedestrian to cross the highway.

FABB greatly appreciates the FCPD’s cooperation and looks forward to working with local law enforcement to make our streets safer for everyone.