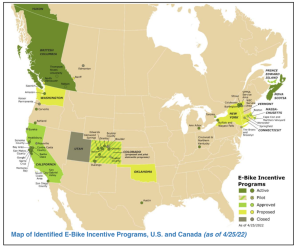 Electric bicycle sales are booming–they outsell electric cars by about two-to-one–and, as Ira Boudway recently pointed out on Bloomberg, they are a cost effective transportation alternative that increase mobility options for underserved populations. E-bikes also are a powerful tool for lowering greenhouse gas emissions and are cheaper, more efficient, and less resource-intensive to build than electric cars.

Across the country, states, cities and communities have initiated e-bike incentive programs (see list here) that are helping to advance adoption of e-bikes, which can bring rapid changes in substituting bike for car trips and start to reduce emissions.

Boudway’s article is worth reading because it highlights that, while rebates and other incentives can help, as with regular bikes, encouraging people to ride them on streets is difficult if they don’t feel safe. And, the best way to make riders safer is to protect them from cars.

Despite being the most populous and one of the richest counties in Virginia, Fairfax County does not have a single protected bike lane. It has had a bicycle master plan since 2015, but implementation has been very slow. With the Virginia Department of Transportation, the county has taken a penny-wise, pound-foolish approach that relies on the annual repaving and restriping program to add unconnected and unprotected bike lanes around the county.

The time is now to move beyond this incremental approach to creating bike lanes. Boudway points out that recent studies suggest that bike lanes without barriers not only do not make riders safer but can make matters worse. We have to move beyond painted bike lanes and sharrows. 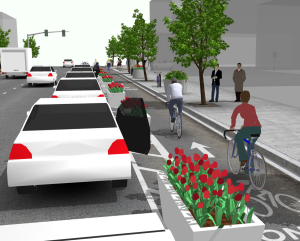 As the article points out, cities—and portions of suburban areas such as those in Fairfax County—have ample extra road space. Reallocating road space and protecting the new lanes with concrete barriers, hefty planters, metal bollards, rows of parked cars or some other sturdy boundary between bikes and cars can be a cost-effective way to rapidly create a viable bicycle network.

Spending just a tiny fraction of the billions that state and local governments spend annually on highways and roads can result in major expansions of bike infrastructure.

Want to help FABB advocate for these changes? Contact us at [email protected].