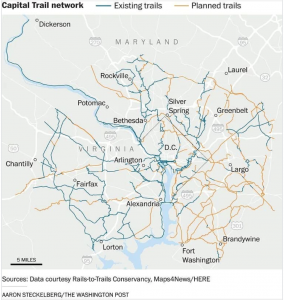 The Washington Post ran a great piece earlier this week on the Capital Trails Coalition (CTC) and the challenges facing the creation of its vision of a regional trail network. FABB is proud to have been a part of the coalition, which now includes more than 60 organizations, since its formation in October 2016.

The Capital Trails Coalition is a collaboration of public and private organizations, government agencies, and citizen volunteers working to advance the completion of an interconnected network of multi-use trails for our region. According to the Post, the CTC estimates that, with an investment of approximately $1 billion, regional governments could build 408 miles of planned trails that would fill gaps in the existing system of nearly 470 miles. 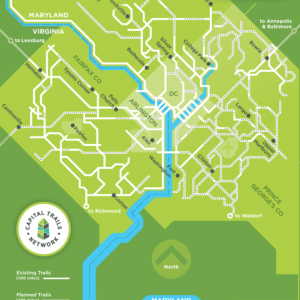 This connected network of nearly 900 miles of trails would improve connectivity between neighborhoods and public transit, commercial districts, and jobs. Most of the 150 projects could be completed within the next decade, although funding for only about 10 percent of these projects has been secured or identified to date. Back in the summer of 2018 FABB brought additional attention to Fairfax County trails by hosting a bicycle ride workshop for CTC members. During the ride, FABB was able to discuss a number of park trails, shared use paths, and segments of the Gerry Connolly Cross County Trail that would be part of a future connected trail network in and around Fairfax County. Currently, FABB is working with CTC on our three priority projects for Fairfax County: the Arlington Boulevard Trail, the I-66 Parallel Trail, and the South County East-West Trail

The Post also reports that the trail network idea appears to have gained political support across the region as jurisdictions seek ways to reduce congestion and their carbon footprint. Support also is growing as more people turn to biking and walking for commuting and recreation. For details on the expected transportation, environmental, and health benefits of such a trail network as well as cost comparisons with other transportation projects, check out the full article here. In addition to continuing to advocate for identified priority projects, the CTC will be working to build public support with future studies on the health, economic and environmental benefits of the trail network.