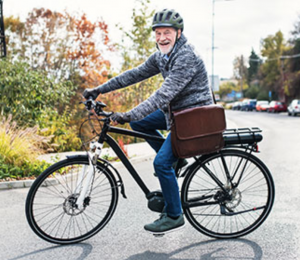 Although there are still issues surrounding how we include e-bikes into plans to expand bicycling facilities and multi-modal transportation options while maintaining safety for all users, e-bikes are gaining popularity and coming into their own.  A recent study suggests that e-bikes help keep seniors healthy and active and, in some instances, might help alleviate Alzheimer’s and Parkinson’s symptoms.

In an article in Fast Company, Eillie Anzilotti reported recently that there is growing interest among older Americans in cycling: Between 1995 and 2009, the number of people aged 60 to 79 who bike increased by 320%, and the recent boom in electric bicycle technology is creating more opportunities for older Americans to consider biking as a mode of transportation. The extra assist from an electric motor makes it much easier for older riders to navigate past the more strenuous parts of the routes they use. As we’ve seen in our area, bikeshare companies are deploying e-bikes as part of their services. E-bikes are increasingly a promising transportation method for older Americans and, because they encourage an active lifestyle, e-bikes can help improve riders overall health. 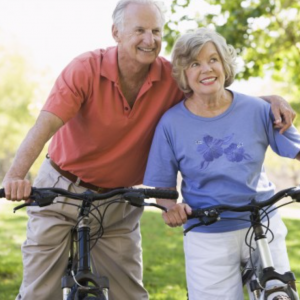 E-bikes could solve many of the problems that current transportation options for seniors pose. Admittedly, aging issues such as failing eyesight, lost range of motion, and weakening balance can make bicycling difficult for some seniors. But, as Anzilotti reported, a growing body of research suggests that biking could alleviate and postpone some of these problems of aging. Active transportation like cycling can prevent the onset of diabetes and heart disease, and keep people’s joints healthier for longer. One study found that faster pedaling, as allowed by e-bikes, improves motor functioning in Parkinson’s patients by around 35%.

FABB was created to make bicycling better for everyone and we’re still working to add safe and connected bicycle facilities to make it easier for people of all ages to attain the health benefits that come from biking. In the United States, however, cities and communities still prioritize the movement of vehicles over the movement of pedestrians and cyclists. In a report released in January, Smart Growth America’s National Complete Streets Coalition NCSC calculated the “pedestrian danger index” for various age groups by dividing the number of pedestrian deaths by the total population measured, and multiplying by 100,000. While the average PDI in America is around 14, for people aged 65 and over, it’s 20.7, and for those aged 75 and older, it’s 28. The increased mobility provided by e-bikes could help bring that number down for seniors.

Making streets safer for older citizens benefits everyone. Helping our seniors live more active lives will improve their mental and physical health which can help strengthen our communities. FABB will continue to work with the county government and others to ensure that e-bikes are included in county transportation plans.