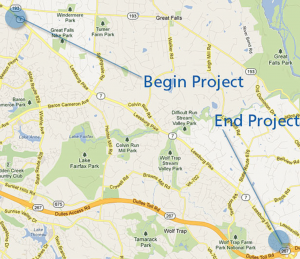 FABB members were out last Tuesday to support and seek improvements for planned shared-use paths at a public hearing on the Route 7 Corridor Project.

This project will improve almost seven miles of Route 7 between Reston and Tysons, primarily by widening the road from four to six lanes and making major intersection improvements. For bicyclists and pedestrians, the great news is that the project will add 10-foot wide shared-use paths on both sides of Route 7. These improvements, as VDOT says, will increase capacity, improve safety and traffic flow, and enhance mobility for cyclists and pedestrians – all in conformity with Fairfax County’s Comprehensive Plan.

The paths occasionally will narrow to eight feet where turn lanes in the road are present. In all cases they will be separated from the road by a shoulder/gutter and a strip of grass.  There are portions of the corridor where sound walls are being installed, and unfortunately the paths will be inside the walls. But, there will be enough room to maintain the 10-foot width with the other separations.

The plan includes installing a new bridge over Difficult Run near Colvin Mill. The paths will run over the bridge above grade with a barrier but will only be 8-foot wide. There will be guard rails at both ends of the bridge that also will separate the path from the road.

It was good that FABB members were there to Speak Up and show support. Delegate Kathleen Murphy was present along with representatives from Supervisors Foust’s and Hudgins’ offices. There was some opposition to the paths as one speaker opined that they would be underused and that a trail on one side was enough. 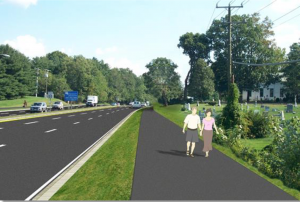 FABB’s Bruce Wright spoke up in support of the project finally connecting the many short segments already built. He also pointed out that the proposed changes to the Baron Cameron intersection posed serious problems for cyclists to traverse. He suggested some possible traffic signal solutions to reduce the danger of the intersection’s free flowing merge lane.

Although not scheduled for completion until 2024, initial construction will start soon. But, there is still time to show support and seek improvements to the plan.

Please take a few moments to email VDOT at [email protected]or fill out its online comment formand tell them you strongly support the two paths plan.  Also, include one or more of the following requests:

There currently is no deadline for public input but always best to Speak Up sooner rather than later.