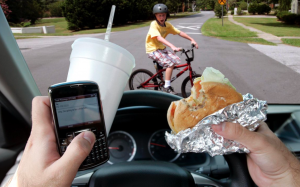 The 2019 state legislative session has come to an end and there are few reasons for the Virginia bicycling community to celebrate. Several promising bills appeared to have bipartisan support, but nearly all were thwarted. The bills sent to the governor for signature included one that clarifies the rules for motorized scooters including a stipulation that these scooters can operate in bike lanes. Hopefully, this will lead to more localities building bike lanes to facilitate both scooter and bike riding.

Several bills aimed to increase safety on Virginia roads by eliminating handheld device use,  increasing the penalty for failing to use due care, and injuring or killing a vulnerable road user (including cyclists). Although a true #HandsFreeVa bill appeared to have broad support in both chambers, SB1341 failed in a small conference committee that was supposed to bring the House and Senate versions together into a bill that would go to the Governor. Instead, the committee amended the bill language at the last minute to allow drivers to hold the phone while talking but not for hand-held input. The added language could lead to inconsistent and/or racially-motivated enforcement. The legislature passed a more limited bill requiring handsfree while driving in work zones.

This year’s legislative session helped FABB realize that we need a more deliberate legislative effort here in Fairfax County. At our annual planning session we laid the groundwork for a legislative subcommittee to begin working with legislators to draft and sponsor bike-friendly legislation. Fairfax County is lucky to have several highly-engaged legislative leaders who have a proven record of sponsoring and supporting bike- and pedestrian-friendly legislation. We plan to work with these legislators and lobby other Fairfax representatives to support better law and policy. If you’re interested in getting involved with FABB’s legislative efforts, sign up here.